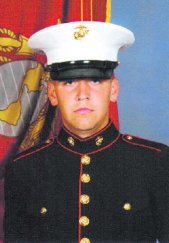 Last week, November 19th, Hico, Texas said farewell to hometown hero lance corporal Shawn P. Hefner.  He died Nov. 13 while supporting combat operations in Helmand province, Afghanistan. He was scheduled to return to his home base at Camp Lejeune, N.C., within a week. Hefner who was a 2006 graduate of Hico High School enlisted in the Marines in 2008.

Heffener’s flagged draped coffin was returned to Waco, TX on Thursday November 19th.   The Patriot Guard Riders of North and Central Texas led the procession from Waco to Hico. As the procession wound its way along Texas 6 through Valley Mills, Clifton, Meridian and Iredell citizens lined the highway many waving American flags as a sign of respect. The entire town of Hico, all 1300, lined the streets to welcome home their hero.  According to the Ft. Worth Star-Telegram Hico School Superintendent Rod Townsend even had all of the students from 3rd through 12th grades bused downtown.

“I wanted the children to see how important he was for this nation,” Townsend said. “I wanted them to have a lump in their throat, just like I did. Some things you can’t teach without seeing it. And you know what? You could have heard a pin drop in this town when those police lights came over that hill.”

This video tribute by USFallen.org shows the return of a fallen hero LCpl Shawn P. Hefner. It is about 10 minutes long but worth the time to watch.

Update: The Stephenville Empire-Tribune posted a video of the actual procession entering Hico.

2 thoughts on “Bringing Home A Hero”