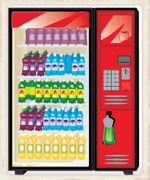 Found another wacky news item on FoxNews.com.Yes, that is right a vending machine that dispenses marijuana. An inventor in Los Angeles has created a machine that dispenses medical marijuana. California is one of 11 states that allow medical use of marijuana. However, the federal government does not recognize the state laws. The machines were created to reduce costs and increase security. Oh, yeah it also reduces the number of employees needed to run a facility. In case of a raid by federal agents fewer employees will be arrested. These machines are a little more complicated than normal vending machines. You can’t just put your money in and get a package of pot. It requires fingerprint identification and a pre-paid card, that is to prevent illegal use of the machines. You can read the original article here.

OK, I realize this happened in California but this is wild. Vending machines that dispenses pot is just way too wild even for California. Even with all of the security measures I’m not sure that it will really prevent drug use by minors or other illegal drug use. Of course, since the federal government doesn’t recognize California’s law I guess even state authorized use of pot is illegal drug use. Of course, taxing and allowing these machines would be an unusual tactic in the war on drugs. Put the drug dealers out of business by providing a cheaper and better product. However this whole thing just seems like a bad idea. What do you think?