Note: Originally posted on 19 December 2008 in our of The Big Guy and My 10th anniversary.

We were married in the same country church were my mom grew up and my grandparents were married. 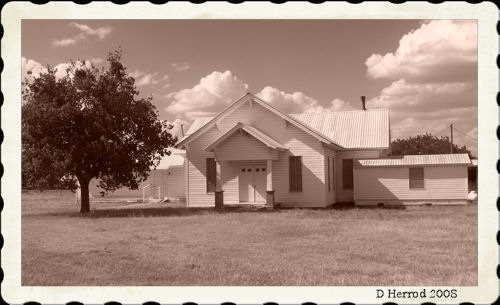 This picture was taken in the summer so the it looked quite different in December. That part of Texas doesn’t really get much snow instead it often rains in the winter. It was very cold and rainy that day. The roads dirt roads were a mess.  Even though it was cold we had to have the windows open before the service.  It seems that sometime between church on Sunday and our rehearsal on Friday evening a skunk had crawled under the pulpit area. Fortunately, by Saturday afternoon most of the smell was gone.