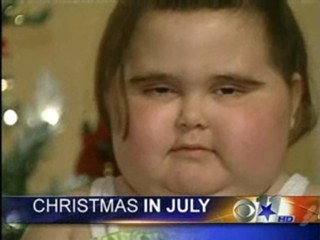 Maybe the subtitle should be Town of Heroes.  The folks in the North Texas town of Krum rallied together to grant a wish for 5-year-old cancer patient Reagan Richards. Reagen’s wish is to celebrate Christmas.  Reagan has been asking her dad for Christmas.  She was diagnosed last year with glioblastoma, a rare and aggressive brain tumor. Reagan’s dad Shawn Richard’s promised her that on July 25th they would celebrate Christmas.  What started as a small neighborhood parade with kids on bikes grew into a large community parade with 50-60 groups involved.  They even had Santa and snow. A company in Austin provided the snow machine. Snow is a rarity in Krum, a town that only gets a few inches each year and rarely at Christmas.

In a time when many people don’t even know their neighbors’, it is amazing to hear about an entire town that steps up to help one of their own.  The turnout for the parade exceeded the town’s population of 3,700.