The criteria for making the list is 1) it has to be a sports movie and 2) I like it. Yes, I know my methods are not scientific and very biased. It is my list.  If you disagree then I encourage you to post your own list. If you create your own top sports movie list be sure to leave a link so I can read your list.

Honorable Mention: Facing the Giants is in no way equal to the other movies on the list but I believe it at least deserves a shout out.  Produced by Sherwood Pictures using all volunteers. It is probably one of the better Christian movies. Sherwood Pictures seeks to produce quality family movies with a very limited budget.

#10: We Are Marshall  – In 1970, a plane crash killed all of the coaches and most of the players from the Marshall University football team. Matthew McConaughey portrays Coach Jack Lengyel who is charged with rebuilding the Marshall football team from ashes.  “We are Marshall.”

#9: Miracle recounts Herb Brooks (Kurt Russell) journey to transform a group of ragtag college kids into a world class hockey team. Brooks and the 1980 U.S. Hockey team will forever be remembered for “Miracle on Ice” when a group of college kids defeated the Russian national team to bring home the Gold.

#8: Chariots of Fire  — Is the story of two British sprinters competing in the 1924 Olympics.  Eric  Liddell (Ian Charleson) is the son of Scottish missionaries.  The other Harold Abrahams (Ben Cross) is Jewish and seeking to earn acceptance in Cambridge. Abrahams hires a professional trainer to help him.  Liddell defeats Abrahams in a prelim race. However, Liddell refuses to run in his qualifying heat because it is scheduled for Sunday.  A compromise is reached and Liddell takes the place of another runner in the 400 meter.

#7: Rudy Ruettiger (Sean Aston) grows up in a Catholic, working class family thatobsessed with  Notre Dame football. Rudy is told that he is to small for college ball and not smart enough to go to college.  Despite great odds Rudy achieves his goal of playing for Notre Dame.

#5: Cool Runnings is about the first Jamaican bobsled team to make it into the Olympics. 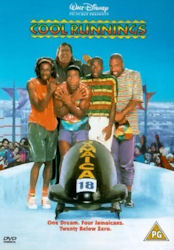 #4: Radio starring Cuba Gooding Jr as James Robert Kennedy “Radio and Ed Harris as Coach Harold Jones.  Radio is a mentally challenged young man who is tormented by some players on T.L. Hanna  High School in Anderson, SC.  Coach Jones rescues Radio and decides to teach his players a lesson, in the process a bond develops between Jones and Radio.

#3: The Blind Side is the story of NFL player Michael Oher (Quinton Aaron) and his journey from a troubled homeless teen to a first round NFL pick.  Oher’s life is transformed by a chance encounter with Leanne (Sandra Bullock) and Sean Tuohy (Tim McGraw).

#2: Brian’s Song chronicles the journey Chicago Bears teammates Gale Sayers (Billy Dee Williams) and Brian Piccolo (James Caan) take in the quest to earn a spot on the team. Along the way they become close friends even though they compete for the same spot. 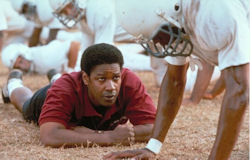 #1: Remember the Titans: A Jerry Bruckheimer movie that addresses school integration in Alexandria, VA. Coach Herman Boone (Denzel Washington) is charged with merging the football teams from the black and white high schools. The movie chronicles the team’s journey from a group of hostile strangers to a championship team.