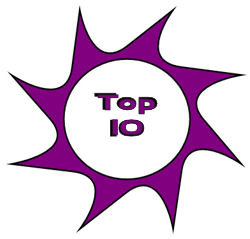 #10 Star Wars: A New Hope (Episode 4): When it came out it was the most amazing movie I had ever seen. The special effects were  cutting edge at the time.  Watching Stars Wars movies became a tradition with my dad.  Yes, I have seen all 6 episodes and I think the Original Trilogy movies are the best ones.

#9 Sweet Home Alabama. Reese Witherspoon plays Melanie Carmichael from a small town in Alabama who has traded her humble beginnings for the big city. She has become a successful fashion designer in New York City. She becomes engaged to the mayor’s (Candice Bergen) son (Patrick Dempsey) but there is one catch. She is still married to Jake (Josh Lucas) who is back home in Alabama and has refused to sign the divorce papers.

#8 The Princess Bride: I love the humor. The movie is filled with quotable lines. It is a good movie to add to your collection. It is one of those movies you will want to watch over and over.

#7 My Big Fat Greek Wedding: I love the transformation of Toula Portokalos from a shy and dumpy girl to a beautiful and confident young woman. Toula is 30 something, single and working in her family’s Greek restaurant. Her dad Gus just wants her to marry a nice Greek boy. After convincing her dad to let her take some college classes the transformation begins. Toula meets and begins dating Ian Miller, a non-Greek. Nia Vardalos wrote and stars in the movie. It is loosely based on her life.

#6 Remember the Titans: A Jerry Bruckheimer movie that addresses with school integration in Alexandria, VA. Denzel Washington plays a coach charged with merging the football teams from the black and white high schools. The movie chronicles the team’s journey from a group of hostile strangers to a championship team.

#5 White Christmas: Growing up we watched the movie every year. I think I was about 10 or 11 the first time I saw or remember seeing White Christmas. My mom let me stay up late to watch the movie. Now that was a rare treat. My mom didn’t like me watching TV. She also was a stickler for following the schedule and routines.

#3: The Princess  Diaries (I & II): Anne Hathaway plays an awkward teenager who discovers she is really a princess. Julie Andrews portrays her grandmother the Queen. When Princess Diaries first came out many critics panned it claiming that it was a waste of Andrews’s talent. To them it was a cheesy movie with little redeeming qualities. I disagree.  It is a sweet, feel-good movie with a positive message.

#2 The American President: Starring Michael Douglas as President Andrew Shepherd and Annette Benning as lobbyist Syndey Ellen Wade. One of my favorite parts of the movie is when Shepherd tries to buy flowers for Syndey. He is amazed that the most powerful man in the world can’t do something as simple as buy flowers for his girl.

#1: Rear Window: In my opinion this Hitchcock classic is one of the bests ever made. It is suspenseful without all of the blood and guts of horror or slasher movies.

The American President. Starring Michael Douglas as President Andrew Shepherd and Annette Benning as lobbyist Syndey Ellen Wade. One of my favorite parts of the movie is when Shepherd tries to buy flowers for Syndey. He is amazed that the most powerful man in the world can’t do something as simple as buy flowers for his girl.